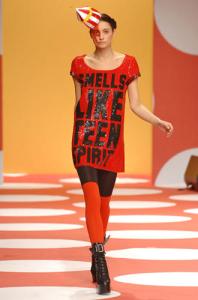 Nirvana’s « Smells Like Teen Spirit » song inspired the slogan on a dress of the Jean-Charles de Castelbajac Autumn/Winter 2008-2009 Show.

Moreover, the picture of Kurt Cobain with a tinsel was one of the inspirations of the Rachel Feinstein’s stage design for the Marc Jacobs Autumn/Winter 2012-2013 Show. 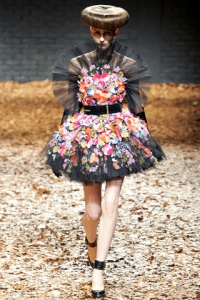 Several dresses of the McQ from Alexander McQueen by Sarah Burton Autumn/Winter 2012-2013 Show sourced their inspiration from flowers.

Other collections with flowers : Alexander McQueen Spring/Summer 2007 (the silk dress of the finale of this « Sarabande » collection was covered with real flowers, such as hydrangeas, peonies and fresh roses), Cacharel (the Liberty print is Cacharel’ DNA and is present in numerous collections of the brand), Chanel (the camellia, which made its 1st official appearance in the Chanel collections in the 30s, was Coco Chanel’s fetish flower), Christian Dior (at the end of the 40s, Christian Dior, launched the « Lily of the Valley », his fetish flower, and « Tulip » lines, with floral prints ; Raf Simons paid tribute to Christian Dior’s love of flowers, a passion that he shares, by presenting the Dior Couture Autumn/Winter 2012-2013 Show in salons with walls covered with delphiniums, mimosas and orchids), Christian Lacroix (from 1987 to 2009, all his couture collections featured flowers), Gucci by Frida Giannini Autumn/Winter 2004-2005 (accessories line, re-issuing the « Flora » print, originally created in 1966 for Princess Grace of Monaco, after a Vittorio Accornero’s painting), Kenzo (since the 70s, flower-prints have been so essential for the brand’s designs that the 1st reviews of Kenzo Takada’s collections mentioned some « flower-dresses »), Jean Paul Gaultier Spring/Summer 2011 (3-D floral prints), Léonard (since the 60s, Daniel Tribouillard has supervised the handmade floral prints that are present in all the brand’s collections), Viktor & Rolf Spring/Summer 2005 (this collection was dedicated to their « Flowerbomb » perfume, launched in 2005).

Posted by Fashion Mayann on July 30, 2012 in Uncategorized

Moreover, Missoni has dressed Michelangelo’s Statue of David with the artist Eladio de Mora (dEMMO) for the Barcelona Shopping Night, on December 2, 2010 (a « Missoni-dressed » David was also presented in New York in 2012). 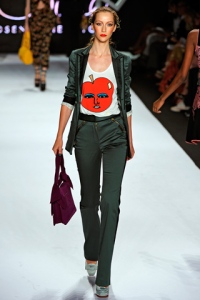 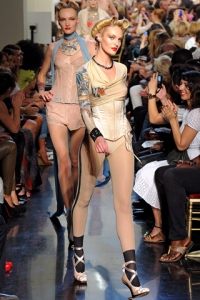 The Jean Paul Gaultier Spring/Summer 2012 Show was a tribute to tattoos.

Posted by Fashion Mayann on July 23, 2012 in Uncategorized 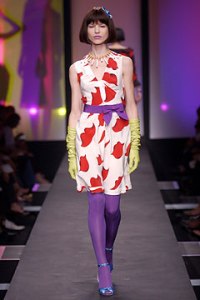 Moreover, Salvador Dalí illustrated the cover of the June 1, 1939 issue of « Vogue », and Delfina Delettrez confessed in the July 2012 issue of « British Vogue » that, as a young girl, she was transfixed by Luis Buñuel’s short film, « Un Chien Andalou », co-written and directed with Salvador Dalí. 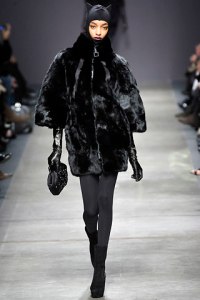 Catwoman inspired the feline ears of the Iceberg Autumn/Winter 2008-2009 Show.

Other Catwoman-influenced collections or items : Altuzarra Autumn/Winter 2010-2011 (Catwoman-inspired outfit), Catherine Malandrino Autumn/Winter 2012-2013 (the story of this show, a woman who turns into a cat, was more specifically inspired by Paul Schrader’s « Cat People »), Christian Louboutin (in December 2009, Christian Louboutin designed a Barbie doll dressed in a Catwoman-inspired bodysuit), Givenchy by Riccardo Tisci Autumn/Winter 2011-2012 (the feline inspiration of this collection was more specifically influenced by Roxy Music’s « For Your Pleasure » album sleeve), Katy Perry (the bottle of her fragrance, « Purr », launched in 2010, is inspired in part by Catwoman’s outfit), PPQ Autumn/Winter 2011-2012 (hats with cat ears), Wolford Autumn/Winter 2004-2005 (« Wolford Look » line based on Pitof’s « Catwoman »). 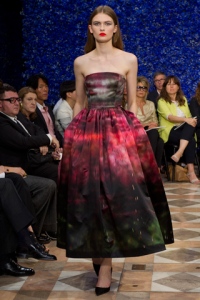 Sterling Ruby’s spray-painted canvases inspired the painted silks he made, in collaboration with Bucol, for some dresses of the Dior by Raf Simons Couture Autumn/Winter 2012-2013 Collection. 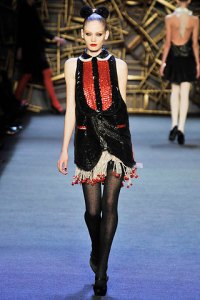 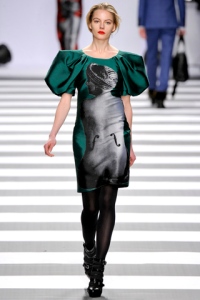 Other Man Ray-inspired collections : Badgley Mischka Pre-Fall 2008 (Man Ray’s pictures of Nancy Cunard were the starting point of this collection), Carolina Herrera Resort 2010, Catherine Malandrino Autumn/Winter 2009-2010 (the hairstyle, by Odile Gilbert, and the makeup, by Tom Pecheux, were inspired by Man Ray), Giambattista Valli Spring/Summer 2010 (influenced by the artists of the early 20th century, including Man Ray), Gucci Spring/Summer 2012 (the makeup, by Pat McGrath, and the hairstyle, by Luigi Murenu, were inspired, in part, by Man Ray), Jil Sander by Raf Simons Spring/Summer 2009 (Man Ray’s « Noire et Blanche / Black and White » was projected on the backcloth of the runway), Lanvin by Elie Top Autumn/Winter 2012-2013 (Man Ray-inspired belt with « lips » and « eye » brooches), Lewis Spring/Summer 2009 (some photographs by Man Ray were pinned on the inspiration board of this collection), Mandy Coon Autumn/Winter 2012-2013 (in part), Sonia Rykiel Pre-Fall 2012 (inspired by surrealism, including Man Ray’s photograph of Lee Miller’s mouth in « Observatory Time – The Lovers »).